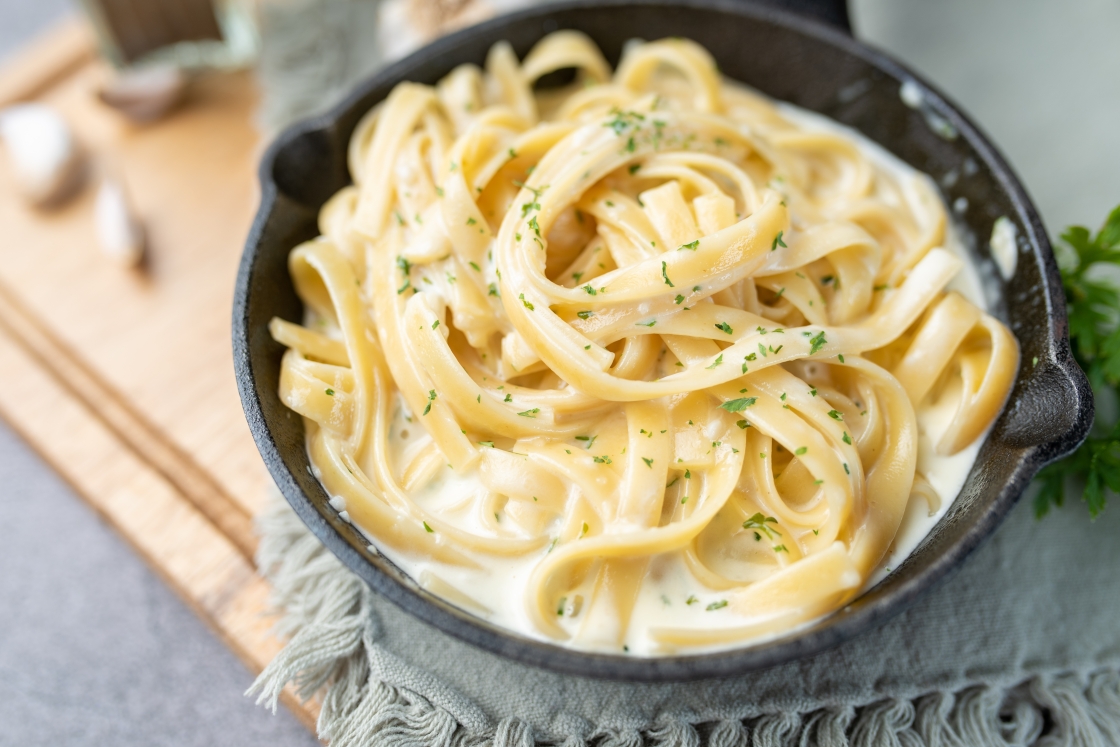 Fettuccine Alfredo is unquestionably one of the most-ordered dishes in restaurants, and it’s no surprise. I mean who doesn’t love a thick, creamy sauce made from cheese? Add pasta and you’ve got a winner-winner for all ages. But, what about all the vegans out there? Or for that matter, what about all the people trying to eat healthy? Can they enjoy pasta with an Alfredo sauce without demolishing their health?

Traditional fettuccine alfredo is basically a heart attack on a plate.

Google the calories in a traditional fettuccine Alfredo dish and you’ll get a wide range of numbers, none of them good unless you’re disciplined enough to stop at 2-3 ounces. As if. I mean that’s like saying you’ll only have one potato chip. (Or one martini, as the case may be.) But, the good news is—and by good news I mean like jump up and down hooray kind of good news—is you can enjoy fettuccine Alfredo without sabotaging your health. But before I get to that part, let’s talk about the “Alfredo” part, the man that is.

Or at least I’m assuming he did because in 1914, after she’d given birth to their son, she found herself without an appetite … so you know what Alredo did? He made a big ol’ plate of fettuccine and tossed it with butter and Parmigiano and just like magic, his wife’s appetite was back.  What a guy, huh?!

Now for the part you really want to know: how to make fettuccine Alfredo that won’t cause your arteries to clog. If you look for recipes titled “healthy Alfredo” or “vegan Alfredo” you’ll find a number of different options for making the sauce: There are some that use vegan “parmesan”(to keep it dairy-free) made from cashews—which, for the record, is pretty damn good as a topping but not really suited for making sauces; some use arrowroot (to keep it gluten-free), or cornstarch or flour to thicken the sauce; some use nutritional yeast to add bulk to the sauce; and some rely on plant-based milks or “cream” to create a smooth sauce; and some use fat-free dairy half and half. But, in reality, none of these things are needed. All you really need is the water the pasta is cooked in.

I know. I know. Skeptics everywhere … but I’m telling you, it works. And according to some Italians out there, it’s a more traditional method than using cream as the sauce is really meant to be an emulsion of the starchy water, butter and cheese. A note about the pasta … while you can try using gluten-free pasta, I don’t recommend it. You need the starch in the water and plant-based pastas don’t deliver—however, if you do want to use gluten-free pasta, use one made from corn or rice and just don’t use too much water when cooking. So there you go. Give it a whirl. It’s easy and it’s delicious.

Bring water to boil in a large stock pot, add 1 tsp salt and cook pasta as directed. NOTE, and this is very important, do not over cook the pasta. Once it’s al dente, drain pasta into a colander but save the water into another container. In another pan, simmer 2 cups of the pasta water with the butter until melted. Slowly whisk in the cheese until it melts. Add pasta, toss and serve. That’s it. Enjoy!